As in Mother In Law Tongue (Sansevieria trifasciata).  Native to West Africa.  We have found that exposing them to sun makes them more yellow.  These two get about four to six hours of sun per day, so they're a little greener.  We had two.  Now, we have three (one is hiding). 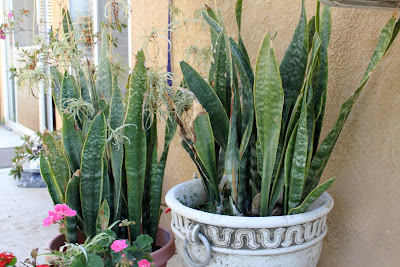 Back in January, these two were one.  We decided to split them, for a couple of reasons.  First, it was getting too big for the pot it was in.  Second, this particular plant was in the garden and planted by my in-laws.  It was not in a good spot, and was not happy.  After a few years, it only had about four spindly leaves (I think those are referred to as leaves, although, I'm sure there is some technical term for them).  We yanked it out and potted it.  The second reason for splitting was to return a part of the plant to my in-laws out in the Temecula Valley.

For the longest time, these two looked terrible.  I thought we had done something wrong, since all we did was yank it out of the pot, my wife grabbed one side, me the other, and we pulled.  Split.  One in a new pot, the other back into the old pot, both with all new soil.  Then today, I saw this... 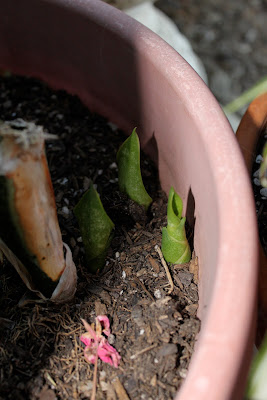 New growth!  Holy crap, we did something gardening like!!  Only one of the two pots is showing spuds, leaflets, or whatever they're called.  However, the other pot looks healthier, so I'm guessing new growth is just around the corner.  We can all breathe a collective sigh of relief now.  Next up for splitting this fall...our salvia.  I'll have to post pictures of that soon.  It's the size of a fully grown polar bear.  It's truly huge.  In the meantime, we will simply enjoy something that actually appears to have worked.
Posted by Turling at 7:14 PM