...is that we can't seem to get this ball rolling!!  So, today we hired someone to help us come up with a plan for this garden.  We've had too many trips to the nursery with no luck and this garden looks strikingly similar to how it looked two years ago.

We have found we're pretty good at doing things once given some direction, and it's the direction we're having trouble establishing.  So, onward and upward.  I'll be introducing our new designer real soon.  Stay tuned...
Posted by Turling at 10:48 AM 3 comments:


For your listening pleasure.  Don't get excited, the picture doesn't change.  Plus, give me some credit, it's my first embedded video.  Christ, Turling, welcome to 2008!!
Posted by Turling at 6:44 PM 1 comment:

Veggie's Are a Bit Closer

Just a bit, though.  Lots of work still to do, but at least we have dirt!  Err, sorry, soil. 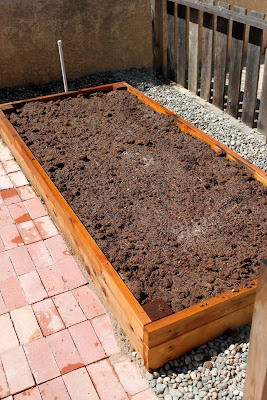 Looks a bit like concrete, doesn't it, but I assure you of ye' of little faith, that it is fluffy and whatever other quality plants like.

After Spurs complete destruction of Liverpool this morning, I felt inspired to actually accomplish something.  Which I still didn't, because as you can see, I have a couple of inches space left to fill to reach the top of the box.  I want to hit the top, so when it settles it won't look half full.

I made a mix of 1/3 compost, 1/3 peat moss and 1/3 sand.  The recipe I had found online called for 1/3 vermiculate instead of sand.   Then, I went to the store and priced vermiculite.  Sweet mother of God that crap's expensive!!!  I would have been better off using 1/3 14kt gold!  Luckily for me, one of the bag's at the gardening center had "accidentally" been opened.  Funny how that happens when you wedge your finger in the top and pull, but I digress.  So, I decided to take a look and vermiculate = sand.  Yes, people, it's f-ing sand.  So, you know what I got???  Well, I got a bag of vermiculate, because there's a little Catholic left in me and the guilt was overwhelming, but after that I got SAND!!  So, it's 1/3'ish sand you could say.

Anyway, now I need to tackle irrigation, because let's be honest, I sure as hell won't remember to hand water everyday, and then complete some fence requirements to keep the rabbits out.  Then, we'll actually plant something.  But, not today.  It's 95F (35C) and I'm grabbing a pint.  Plus, I'm dog sitting a chihuahua and, to no fault of my own, it's barricaded itself under the television console.  I'm sure it's pissed its little brains out down there, too.  It's sure peed every where else.  Where's that pint??
Posted by Turling at 2:47 PM 2 comments: