Email ThisBlogThis!Share to TwitterShare to FacebookShare to Pinterest
Labels: spurs

My Vegetables Are Irrigated 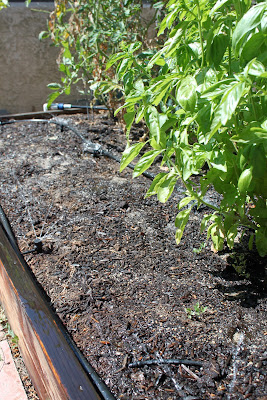 I do not say that due to my inability to water by hand, which I am incapable of doing in a consistent manner.  No, we have entered our Southern California "Autumn".  I say this because our day time temperatures still hover around 100 F (38C), but our nights are dropping into the 50's F (10's C).  This means my peppers have given up hope (although I have one plant that has a few clinging to life) and the tomatoes have said adios.  Perfect time for me to get the irrigation done. 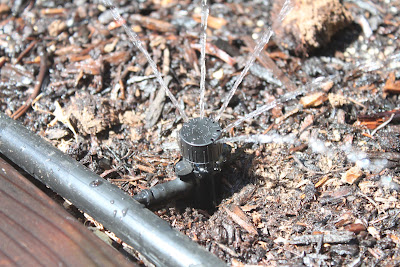 I plan on sowing a lot of seeds directly into the garden as opposed to starting them indoors and then moving them outside.  As such, it occurred to me that a pure drip system may not work as half, if not more, of the seeds will never get water.  We don't get rain, so just get that thought out of your head right now.  The only water I get is what California steals from Arizona!  Ok, Arizonians, put those weapons down.  They're crazy, you know.

(As a complete aside, my boss at work has a son in college.  This particular college requires them to take a 5 week course studying abroad.  Their choices?  Czech Republic, Italy, Hong Kong and...Arizona.  Yea, they're out there.)

I decided to put some sprayers out instead of drip emitters.  Unfortunately, these aren't cutting it.  Notice the streams above?  Makes a nice set of stripes.  Not what I'm looking for. 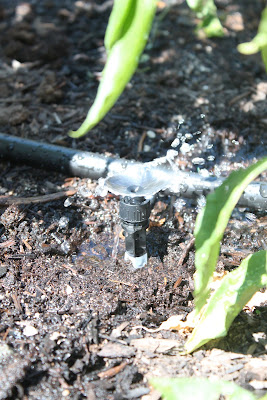 I also set a row of 360 sprayers down the middle.  Unfortunately, again, not what I had in mind.  They spray fine....about 3 inches.  You unscrew the top to get more spray.  At inch 4 the top popped off and I got a face full of water.  A very Three Stooges moment.

So, I'm going online to dripirrigation.com to find something that might work better.  I've always had good luck with them.  I'm not linking, as they don't pay me.  And, I'm lazy.

I also ran into a problem from my last post.  You may remember that I linked into the wrong side of the zone I'm tying this irrigation into.  Now that I've linked into the correct side, I've realized that I didn't bother capping any of the sprinkler heads I'm no longer using.  Think Caddyshack.  Yea, it was that bad.

Always Know Your In Hole from your Out Hole

It comes in handy in many aspects, especially irrigation. 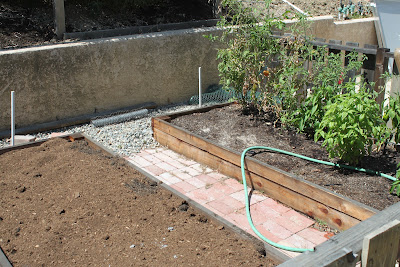 Here's the veggie garden.  Don't mock it, we're starting small.  Plus that bed on the left until a week ago had no soil in it.  Progress, baby.  As you can see there are two pvc pipes sticking straight up above the backs of the beds.  Many moons ago, I hooked those into the existing zone, since the zone was no longer needed.  We removed the big patch of grass this sprinkler zone had been watering, thus a free zone.  It's now the veggie zone.  One problem.  I turned the valve on and water came up from a missed sprinkler head 20 yards away.  That will not due.  No water came out the pipes it was supposed to come out.

As I said, it was many moons ago that I did this so hell if I remember what was where and why.  I couldn't have forgotten to hook the line in before covering it with, well, everything.  Could I?  (My wife would say, "yes".)  I found the line from water bubbling through the ground and dug it up.  Hole where a shovel pierced it.  Maybe that's the problem.  Fixed the line and another geyser coming out of the ground a few feet on.  I dug that up.  I found this: 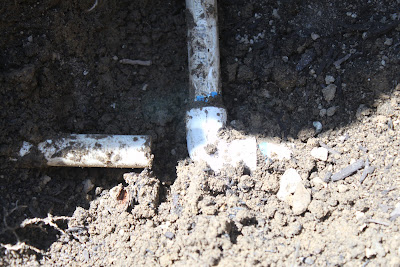 Aha!  Now I remember.  This is where I hooked into the existing line.  The pipe going out the top leads into the garden.  I hooked into the line to the right.  Unfortunately, that's the outgoing!  The incoming is the one on the left.  Hells bells. 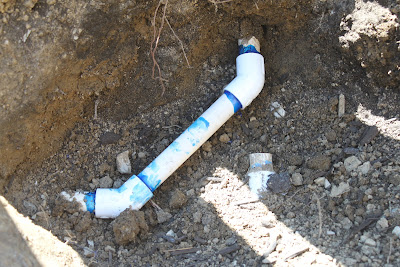 Easily fixed.  Now, I have water gushing from the spots it's supposed to.  Now to do the rest.  It has been so ungodly hot, though, and this took hours to figure out, that the rest will be done later.  I hate living in the desert.
Posted by Turling at 6:22 PM 7 comments: