I recently purchased a book called The Art of French Vegetable Gardening. 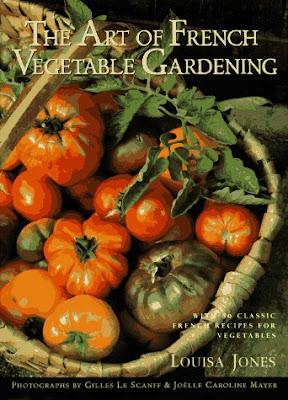 The books been around a while (nearly 20 years), as I'm always late in my reviews, but it's still new to me.  Anyway, the point of today's quick post is not the review, we'll do that next week, but to point out the timeliness of Tatyana's visit to the Heronswood Gardens over at MySecretGarden.  She's posted pictures of the potager garden today which fits right in with the book I'm reading.  Anyway, head on over there and check out the pictures.

Below is a sample.  Thanks to Tatyana for letting me swipe it. 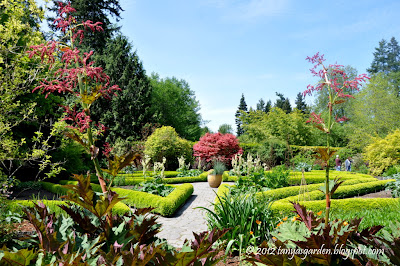 I had me, wait for it...three gophers at once this spring.  I have no idea if gophers are like birds and only spawn a certain time of the year, but it certainly seems that way.  Anyway, I had one in three of the four corners of the yard.  The trap I use is a cinch trap.  Works like a charm.  I nailed the first two in the same day.  Set the trap in the front about 11 am then went back out around 2 pm to a varmint.  Moved the trap to the other side of the yard then went back out around 6 and got a second.  Supremely easy.  Here's the third.  And, don't panic, there aren't any pictures of dead animals. 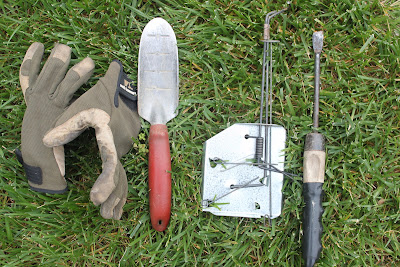 Here's the utensils.  Cinch trap is second from the right.  Gloves are for the fact that the trap is a bugger to set.  The trowel and weed puller are for finding the holes.  Got it all together?  Good, off we go.

Below are the telltale signs of gopher problems.  Mounds of dirt.  That, you didn't make.  Now, if you have kids it's entirely possibly random mounds of dirt could be their doing.  In which case, flatten out the mound and come back the next day to see if it or any others have appeared. 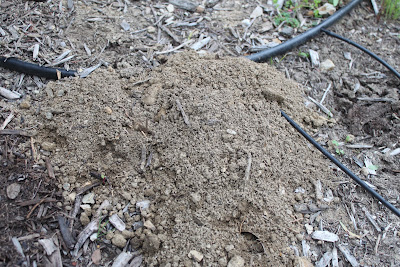 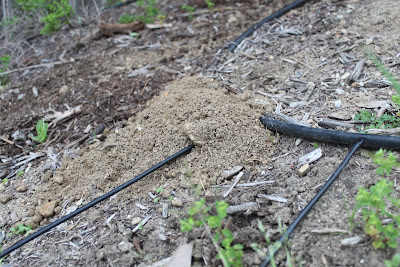 This particular hole was on the side of a hill, which I found makes it extremely difficult to dig out as the hole wants to collapse.  As it's hard to tell which direction the tunnel goes, I start poking the weed puller into the dirt until I can find which way it's running.  It's pretty easy to tell, as you can see, the puller goes in right up to the handle when you've found the tunnel. 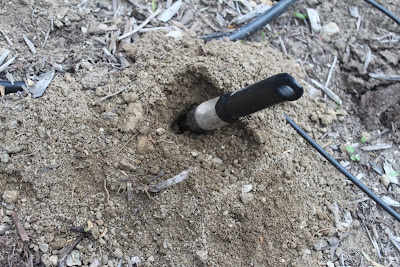 Using the trowel dig it out.  I don't have any pictures of that, as I was digging and am not talented enough to photograph myself digging. 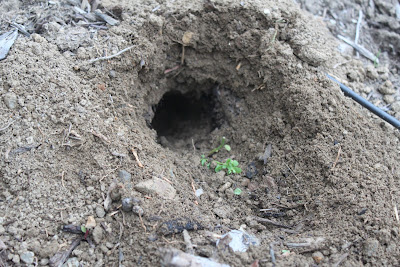 When you're done, the hole should look like the above.  Stick the weed puller back down in there to make sure it's a tunnel and not just a deep hole. 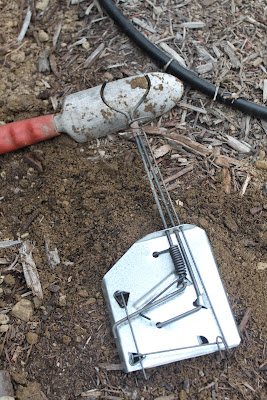 When that's done, set the trap.  There are instructions that come with it, so I won't get into that here.  I will point out that step one is to put on gloves.  Put.  Them.  On.  The spring mechanism is strong and when you get your finger trapped in a sprung trap it hurts like hell.  Hurts more like purgatory with the gloves, so wear those.  If you have gauntlets, more power to you.  Now, from the above picture you get an idea on how it works.  There is a small trigger that the vermin's nose hits which springs the trap and "cinch's" (get it?) it's neck in the end that's laying on the trowel. 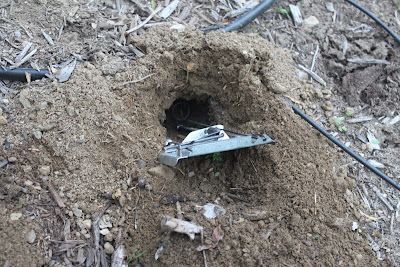 Then it's quite simple.  Stick the business end of the trap in the hole.  And, you're done.  One thing to consider, though.  The hole needs to be big enough for the trap to actually be able to close.  Otherwise, it gets hung up on the dirt and the little bastard gets away.  If it's difficult to put into the hole, use your trowel to widen the hole.  Don't dig, just stick the trowel in there and pry on all sides until the hold is wide enough. 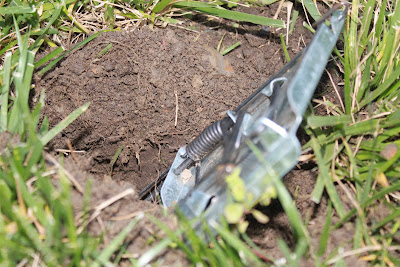 As you can see, I speak from experience.  First attempt the hole was too small.  Trap got hung up.  The little terrorist then moved into the lawn, so I had to have a second go.  I'm not sure what happened with the second go, but... 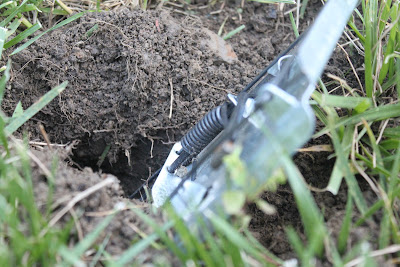 The trap is reusable and runs about $15 USD.  To get the gopher out, just start to reset the trap and it will fall right out.  Be sure you're above whatever you want to dispose it in before doing this, though.

And, there you.  If you're from cinchtraps.com, put my check in the mail.
Posted by Turling at 7:53 PM 8 comments:

Dear Arsenal...Lasagna, It's What's for Dinner!!

Final game of the Premier League season tomorrow at 7 am PDT.  Our beloved Tottenham Hotspur take on Fulham at home as we sit in fourth place.  Arsenal sit right above us in third.  A win by us combined with anything other then a win by Arsenal put us third.  I expect both of you will be watching!!  And to all the Arsenal players out there, I understand lasagna is a fantastic pregame meal.  Eat up, lads!

Also, it appears Fox is putting a game on nearly every channel it has on cable television (although, surprisingly not on FOX).  Spurs will be on Fox Soccer Channel, but the following channels will be showing games, as well:

And, for those of you outside the U.S., yes, we have a lot of freaking TV stations.

P.S.  Also, Premier League executives, the final matches on Mother's Day?  Really???  Throw a brother a bone!!  Do you know how much of my Father's Day I now have to trade away to get the game on in the morning.  Crikey!  Yes, I felt an Australian saying was appropriate.

P.P.S.  For those of you unfamiliar with the lasagna reference, several years ago going into the final game Spurs sat fourth and Arsenal fifth.  Spurs lost, Arsenal won resulting in a flip-flopping of positions knocking us out of Champions League qualification.  It was blamed on bad lasagna the night before, although that's probably a load of hooey and in ten years it will be said we were attacked by ninja's, I'm sure.  So, let's just get that ball rolling.  You heard it here first:

"Spurs Attacked by Ninjas!  Lose Fourth to Arsenal!"  Story at 11!
Posted by Turling at 8:00 AM No comments:

Email ThisBlogThis!Share to TwitterShare to FacebookShare to Pinterest
Labels: spurs

Beam Me Up, Scotty, There Be...Vegetables!

I have joined the 6-week challenge over at Nerd Fitness.  Great site, by the way, run by a guy with the world's greatest Lego collection.  Anyway, in this challenge each participant needs to choose four things that they are going to complete in the six week period.  Three need to be health/fitness related and one "other".  Mine are:
I think you can guess what the topic of this post is going to be.  Yes, boys, girls and dogs of all ages, we have vegetables.  In the ground even!! 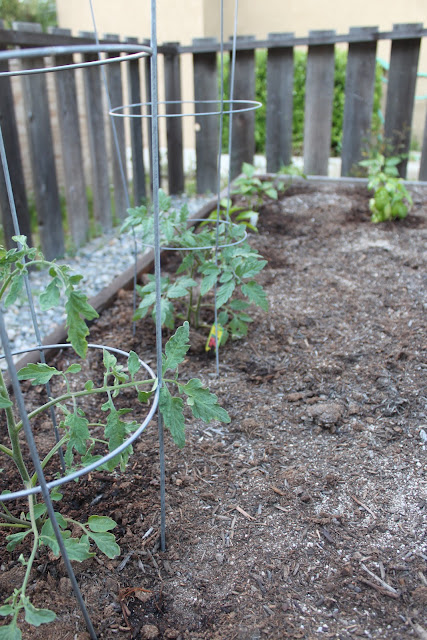 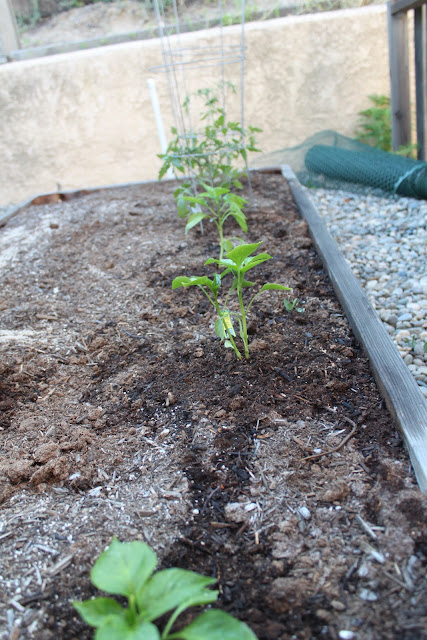 In order to be able to harvest something by June 11th, the end date of the challenge, I needed to get stuff in the ground.  I planted two types of tomatoes:  a Mr. Stripey, which is a yellow and red striped large tomato, and what was labeled a Sandwich Tomato.  Hey, it was a big box store, I'm surprised they just weren't all labeled "Tomato to Eat".  I also plopped in four green bell peppers and some sweet basil.

So far so good.  They've been in the ground since Sunday and nothings dead, yet.  Going to have to start referring to me as Farmer Turling soon, me thinks.
Posted by Turling at 7:06 AM 8 comments: