I Compost, Therefore I Am 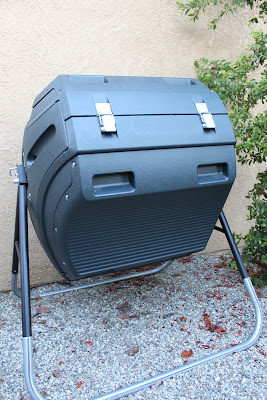 A couple of months back, when I wasn't blogging which we shall refer to as the "dark ages" for obvious reasons, we picked up a compost bin at our local big box store that you have to pay to be a member of.  I don't pay, it's a gift membership, but anyway...

The second reason takes a little more explanation.  We have been pondering this for a while.  Now, most people would ask, "why ponder, it's just dirt?", well it's not that simple.  I wanted to create a very simple chicken wire structure from lumber and chicken wire we already have.  I have read about composting and had come to the conclusion that it would be a cheap way of creating the black gold for the garden.  My lovely wife has not read about composting and was of the opinion that it would be a stinking pile of shit that attracts rats.  So, this is our compromise.  I get the compost, and if it is a stinking pile of shit (because I did it wrong, which is not out of the realm of possibility) it would be contained.

I'm glad to report that every time we open the bin to put in scraps, clippings, etc. it smells just like...dirt.  I have been vindicated.  For now. 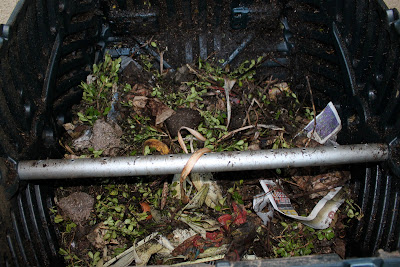 The innards.  Not bad, people, it's not like I opened up a deer or anything.  So, we currently put our table scraps of veggies (no meat, dairy, etc), yard clippings, newspaper, egg cartons and the like into the bin.  We keep a smaller old Folger's can on the counter to put them in while cooking.  From what I understand, it takes roughly 273 years for this to break down, so my great, great, great, great, great, great, great, great, great grandson Turling X will post it's completed compost.  Granted in 273 years we won't have computers, and he'll just e-mail it directly to your brain.  So, be sure to sign up for updates!  In reality, I think it's closer to a few months, so we'll see.

Lastly, I have one question I am pondering, that I need to research.  I've read that I should have a 50/50 mix of "brown" stuff to "green" stuff.  The green stuff being obvious, but the brown along the lines of newspaper, fallen leaves and the like.  My question is if I let the green stuff, such as grass clippings, dry out and turn brown before composting does it count as brown stuff?  The reason being this is California and we don't have things around such as fallen leaves and the like.  Just green stuff.  Once I find the answer, I'll be sure to post that.
Posted by Turling at 6:35 PM 5 comments:

Nice video interview of Rohan Anderson, who's blog is linked to on the left.  I've never met him, since he's in a different hemisphere, but I read his blog whenever something new appears. 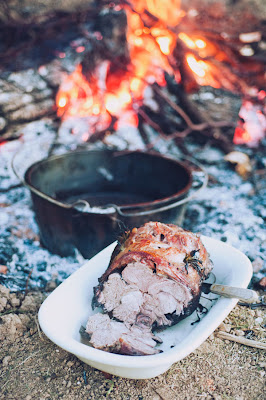 I stole this image from his site.  Hope he doesn't mind, but I am giving some free advertising here!
Posted by Turling at 10:42 AM 3 comments:

Email ThisBlogThis!Share to TwitterShare to FacebookShare to Pinterest
Labels: blogs 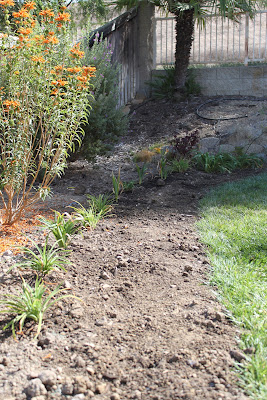 Odd that I use biblical references so much, since I'm an atheist (knock 10 off the followers after that little revelation).  Anyhoo, we here at Castle Turling (read:  me) actually planted stuff this weekend!

Yes, they're small, but aren't we all at the beginning?  These are the daylillies I previously posted on these way back in January.  My God (biblical), that was 10 months ago.  And, yes, they're four inches tall!!!  Bite.  Me.  Greenhorn!!  It's in the title!!  I'm making no promises here, this is nothing more then an exercise in self degradation.

Moving along.  We finally got these in the ground.  I've been trying to get them to a point where they were tall enough where the rabbits won't eat them.  Then, we inherited a chihuahua.  That's another post, but the rabbits have vanished, although the chihuhua is the biggest pansy I've ever met.  Rabbits are dumber then dogs.  Write that down.  So, I'm feeling glass is half full that that the rabbits won't eat them to nubs.  The plants to nubs, not the chihuahua, although that wouldn't surprise me.

Now, my soil dirt is nothing more then inert matter.  Here's an example: 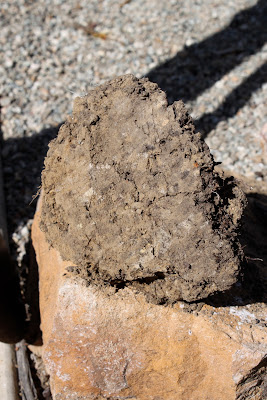 Bear in mind the darker brown on top is the soil and the orange item on the bottom is a field stone.  We have incredibly hard clay soil.  In an effort to make things grow, we're adding matter as we plant.  To the bed above we've added: 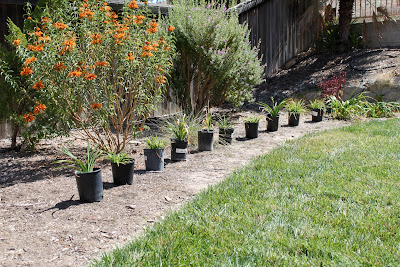 These are the daylillies pre-amendment all laid out.  And,  a couple of year's ago, I added two inches of planter's mix to this very bed.  No noticeable difference.  So, we added the above items and turned the soil in the couple of feet next to the lawn.  (At this time, I'd like to note the spectacular Lion's Tail in the background.)  I need to add about four more daylillies to the tail end (closest to the camera) in order to complete the entire row.  Our local big box store had some sorry looking daylillies, so I'm going to hit up the nursery this week.  In the meantime, I'm going to continue to add amendments to the backside of the planted row to get ready for the rest of the plants we'll attempt to get in this fall.

P.S.  North London Derby, Spurs 2, Arsenal 1.  All hail Kyle Walker.  What a strike.  And, all hail Wojciech Szczesny.  Should have had that, he should.