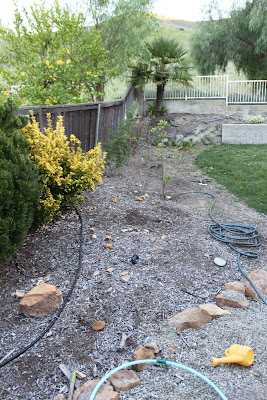 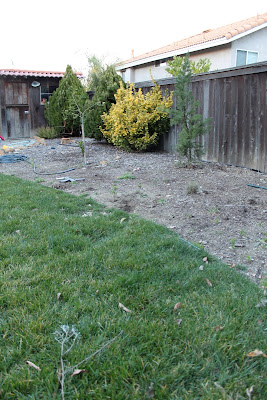 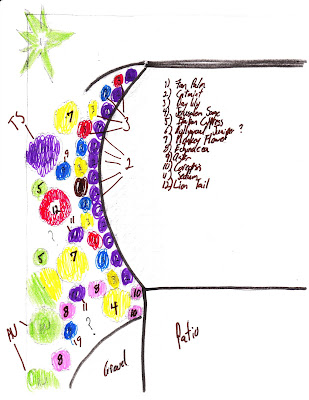 Not a good rendition, no, but it works for us.  I think it also shows that you don't need a lot of fancy stuff to create a plan.  This is actually on a piece of graph paper and I used our kids crayons for the original.  That didn't show up in the scan, so I did it again in markers.  The plants or pretty close to what their fully grown size will be.  The top photograph above is taken from the gravel.  See, down at the bottom, it says "gravel"?  My handwriting is horrid, but you should be able to make out the "G".  The second photograph is taken from the top of the plan looking back towards the gravel/patio.  We're putting in the following:
This area received full sun, which is why the Jerusalem Sage (4) and Lion's Tail (12) are moving there.  On the other side of the walking path behind our house are two massive Pepper Tree's.  You can see part of one in the upper right corner of the top photograph.  They have in the last couple of years pretty much blocked the sun from the area the Lion's Tail and Jerusalem Sage currently nest.  The backyard is south facing, by the way.
Since buying so many plants will be pricey, we're making an attempt at growing some from seed.  Won't that be a treat????????  The catmint looks like poppy seeds.  I hope the DEA doesn't show up.
In the meantime, I'm off for a pint.  Speaking of pints...stay tuned for the next post.  (That's called a "cliffhanger" by the way.  Let's see if it works.)
Posted by Turling at 8:00 PM