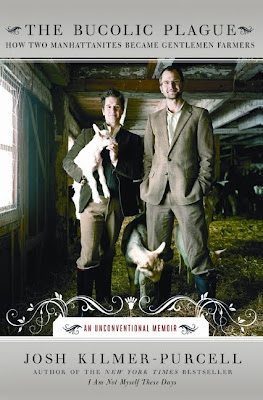 I wanted to like this book.  I really, really, really did.  Perhaps, that's why I was disappointed.  I still did enjoy the read, I guess it was just not what I was expecting, and that failure to meet my expectation eventually let me down.

Josh Kilmer-Purcell and Dr. Brent Ridge are a couple from Manhattan.  During a trip to upstate New York, they stumble upon a small town called Sharon Springs.  In that town is an old farm called the Beekman Mansion.  The estate was created in 1802 by a local merchant and farmer, William Beekman.  After falling into disrepair, as so many of these places seem to do, it was available for sale when the two drove by.  On what was described as a whim, they purchased the farm and began plans on renovating and making it a second home.  After a time, the boys decided they, although it reads as though it were mostly Purcell, want to turn it into a full time home and need to find a way to make the farm self sufficient in order for that to happen.  Both have full time jobs in New York, Ridge with Martha Stewart and Purcell as an ad executive, so would be leaving substantial income and opportunities behind in order to accomplish this.

Now, that's where the story for me takes the turn I wasn't expecting.  I thought it would be more along the lines of hours of toiling in the soil, restoring the home, before and after pictures, etc.  Instead, it really is the memoire it is described as and spends much of its time on the relationship of Ridge and Purcell, the business aspect of what they are hoping to do, the characters in Sharon Springs and Martha Stewart.  There's lots of Martha.

The two also have a show shown in the US, I'm not sure if it's shown in other parts of the world, called "The Fabulous Beekman Boys".  The show follows there lives as they try and make the Beekman Farm become the self sustaining business and home they want it to be.  This book was written prior to that show, so don't expect tidbits of filming and the like.  I guess you can consider the book part one and the show part two of their journey.

Overall, I did enjoy this book.  I would recommend this book to anyone.  Keep in mind, that this book is more about following dreams and the stresses related to trying to start a business while balancing your personal life and not going bankrupt.  It is not what I would consider a farm or garden book.  And, I think that expectation is what led to my disappointment.
Posted by Turling at 5:15 PM