Quite exciting weekend in that some gardening actually got accomplished.  Even more exciting since the word "Garden" is in the title of this blog.  I believe that's called a win-win.  I always like to throw in a bit of business terminology that makes my stomach turn.  Anyway, on to the gardening... 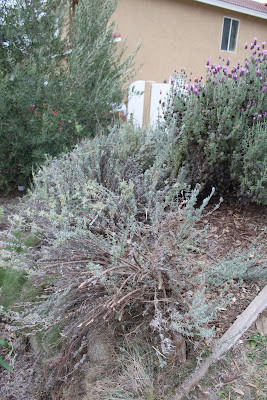 We got about halfway through trimming back the lavender.  It's the first time we've trimmed these, and they are coming up on year three.  They look a bit butchered, but I'm hopeful they bounce back.  We didn't touch the one's that are blooming, such as the one in the upper right of the picture above.  We'll hit the second half next weekend. 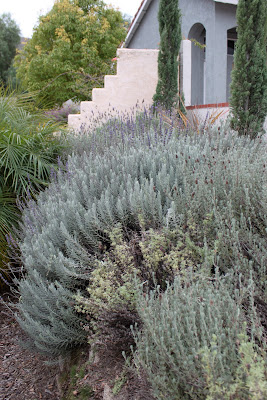 As you can see, the 13 or so lavender have kind of grown into one large mound of plant.  Which, of course, was the point.  I love it when a plan comes together.  Especially, because it happens so seldom.  Not that it comes together, more that we actually have a plan.

Next up was something I have been concerned with for some time.  The trimming of the olive tree. 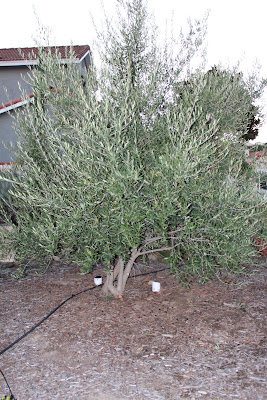 Of course, I didn't take a picture of it before I trimmed it.  Remember the whole "we rarely have a plan" comment?  This would fall into that category.  (Actually, fine reader, you really should substitute the "we" with "me" or "I", as my lovely wife always has a plan.  I just stumble along.)  Here is a picture of the olive from a few months back: 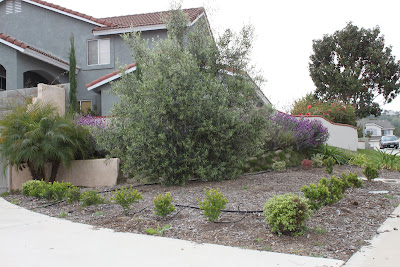 As you can see, it was really more of a bush.  Now, it's more like a tree bush.  I hacked off about the bottom two feet.  Next year, we'll hack off a little bit more, and then it should really look like a tree.

In the meantime, let's all light a candle and hope it doesn't die.
Posted by Turling at 6:25 PM