Somebody Was a VERY Good Boy This Year!!

I'm not sure who that was, but I'm sure somebody was.  There are 6 billion people in the world, 49% of them boys, so I'm using some basic statistical analysis, I figure three were good.  Therefore, my title is not misleading.  Oh, of course it is while referring to me.

Needless to say...here are the goods... 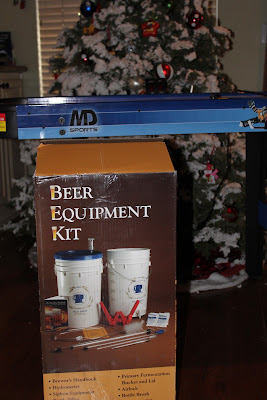 Not the air hockey table.  That's for the other good boy in the family.  No, ladies and gentlepersons, the Beer Equipment Kit!!!  Five gallons of true bliss will be mine in four weeks following the day I gather the courage to actually brew something.  I give it until Saturday.  Damn the courage, this is beer people!!

Now, IG recommended How to Brew by John Palmer, which my lovely wife also obtained for me and I have since read nearly cover to cover.  Los Angeles to Phoenix, Arizona and back is a long drive, so I've had some time on my hands over the last few days.  This book is literally the bible he described.  That IG described, of course, for all I know John Palmer is a member of a satanic cult, so his bible would be completely different.  The books contains all sorts of charts and graphs and math and big, long words and other things I didn't understand.  It pretty much reads after chapter four as "blah, blah, blah, beer, blah, blah, blah, better beer" etc.  Not to knock the book, as I'm sure as I move along things will become more clear and I will refer to it consistently.  Thanks, IG.

I also got this: 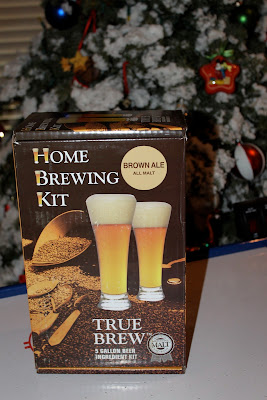 Now, Big John Palmer (really, we're practically cousins now) doesn't recommend kits that say to add pounds of sugar, rather use a kit that contains multiple types of malt, or at least malt in place of sugar, which this does.  It contains both liquid and dry malt in addition to hops, which if you read my last post isn't going to be NEARLY enough, along with a bunch of bottle caps, dextrose (which has me concerned) and yeast.  Per Palmer's recommendation, I'm going to toss the yeast and go buy fresh yeast tomorrow.  Otherwise, I'm going to use everything else in the kit.

The other thing that shocked me was that a kit makes five gallons which is roughly 48 12 oz bottles.  That's a lot.  That's all of breakfast and part of lunch.  So, I decided to get started collecting bottles this morning. 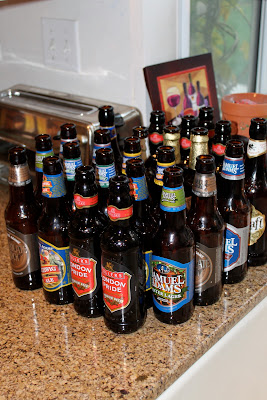 Not bad for a light brunch, I say.  In the meantime I'll be sure to take lots and lots (read: 1) of pictures of our first batch this weekend.  IG can tell me everything I'm doing wrong.  Oh, and Kyna's Canadian so, she should know what to do simply through osmosis.

P.S.  I almost forgot, I haven't updated both of you on YOUR football team.  Tottenham has been spectacular recently.  Won our group in Champion's League and drew AC Milan in the knockout round starting February.  Also, we beat Aston Villa and Newcastle on Boxing Day and 48 hours later to be sitting fifth in the table, only two points behind the Evil Empire (aka Chelsea).  Now, if we can hold on to Bale and Modric through the January transfer window and find a central defender capable of playing more often then once a month we'll be in business!
Posted by Turling at 3:54 PM