My Brilliant Idea and a Gopher Update

Well, gopher first.  The little bastard has briefly outsmarted me.  It set dummy holes along the back planter, which were about three feet above the holes I pictured Monday.  I set my trap, only to get squat.  Removing the trap, I put my hand in the tunnel and realized it was filled two inches further down.  The best I can figure is the little bastard comes straight up, then the hole fills over the evening.  Looking at new mounds revealed no tunnels.  I decided to smooth everything out and wait for tomorrow to see if there are any new mounds.  You have won this minor skirmish, my adversary, but I will win the war!!  Woo-ha-ha-ha.......

Now, to my brilliant idea.  I have spoke before about our wisteria.  Well, my wife and I (not the kids, they couldn't care less) realized that the post I set up for the wisteria to grow up was going to create a problem. 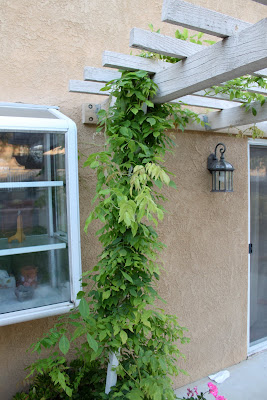 Yes, there as a 2x2 post in there.  We realized once the wisteria grew, that it would be impossible to get the post out, since the wisteria had wrapped itself around it like a stripper in a Las Vegas club.  Not that I would know anything about that.

We decided it would be best to pull the post out (too many visuals regarding Vegas) and tie the wisteria to it, rather then allow it to wrap itself around it.  That way as the trunk thickens (this just keeps getting better) we can remove the post and the plant should stand on its own, as it did before we tried to kill it.  So, after the obligatory pints (Killian's Irish Red, if you must know), I decided to attack the stripper plant. 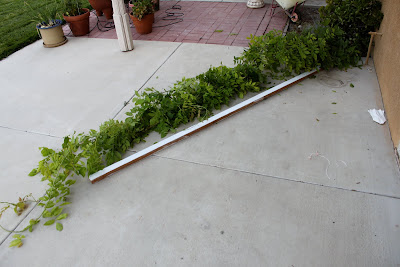 Surprisingly, the post slipped out easily.  Stop it.  I mean it.  Stop.  This is the now limp plant next to the hard rod.  I used a couple pieces of that green stretchy garden stuff that I'm sure has a name, but I'll refer to as the rubber.  Tied the plant off in a couple of places and propped it back up. 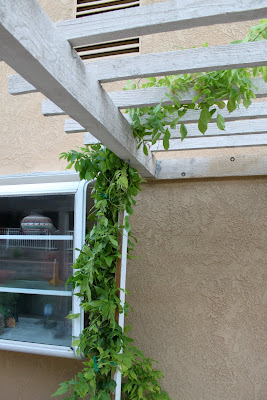 Erecting the limp plant on the post put it right back where it was, and was obviously most happy.  But, then who wouldn't be.

In the winter the wisteria will go dormant (at least it does here, and I'm hoping that's normal), and we'll cut it back to one or two trunks.  In the meantime, off to the showers.
Posted by Turling at 5:00 AM