Well, we survived our excursion to Washington, DC.  I had a seminar to attend on SEC reporting, which was actually quite informative.  The folks at the SEC Institute put on a top notch event, should you be so inclined (or required) to attend.  While I was in my two day seminar, my lovely wife and son enjoyed a few of the many sites around our nation's capitol.  I, unfortunately, only got Saturday to drag them around to the sites I wanted to see.  With a seven year old, as I'm sure you gathered, stops at botanical gardens and arboretums are not on the agenda.  Aquariums, museums and anything involving the sale of ice cream top the list.

I would like to give a special thanks to The Elegantologist and ADG for their very helpful tips and recommendations.  I'm starting to realize all of you other blogging folks aren't such a bad lot, myself excluded, of course.

At this point, I must point out one thing that still irritates me.  Now, I do hate to dwell on the negative after a great getaway, especially when the entire rest of the trip was wonderful, but here three days later this still is under my skin.  On Saturday, we visited the American History Museum.  Just outside the museum, my son had purchased a small American flag on a stick.  One that probably every other country in the world sells.  When we here at Castle Turling secede from the Union and establish our own kingdom, even we will sell little flags on sticks.  Once my son (remember he's seven) walked three feet from the man selling the flags, he no longer wanted to carry it.  My wife then put the flag into her backpack, so the flag itself protruded out the top.  She looked like a tour guide.

Upon entering the museum, we had to go through security.  The guard, or officer, I'm not sure whom he worked for, told my wife that she had to roll the flag up and put it upside down into her backpack so only the stick stuck out.  When she, rightfully, asked why, she was told we didn't want to offend anyone.  WHAT????  ARE YOU F-ING KIDDING ME????  OFFEND ANYONE????  We're in the AMERICAN History Museum and we can't display an AMERICAN flag??  Want to know something...I'm offended!!!!!  If I were to walk into the British Museum, I would expect every single person to be carrying the Union Jack.  I reckon I could have carried that into the American History Museum.  Anyway, back to the task at hand.

For today, I want to talk about our, I believe, Sago Palm (Cycas revoluta). 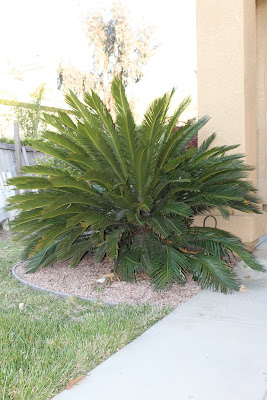 This palm (ok, I understand it's not a palm and it's not a fern, it's a cycad, but if it walks like a duck, talks like a duck...you know where I'm going with this) is right at the front door.  It dominates the walkway that you can see a portion of in the lower right.  I really like this palm (shut up) and it seems to really like the spot.
However, if you'll notice at appears to have been hit with a samurai sword several times on it's right side.  Bear in mind, I did no such thing.  I have other uses for my samurai sword.  The issue is this: 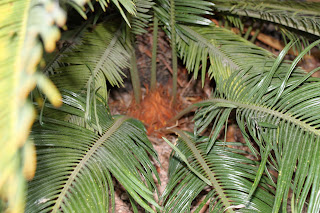 What is that, you ask?  I'm guessing it's offspring.  Their are six of these growing around the base of the palm.  I was under the impression these plants are single trunk, so either ours is proving some Darwinian theory or I'm mistaken.  For the past couple of years, I have cut of the prawns from these little devils and the next year they sprout anew.  At this point, the cones are now starting to poke through, so I feel I'm at a crossroads.  Do I allow a seven headed monster, keep cutting the prawns or embark on some more drastic surgery.  I'm not sure how of if I should remove the children from the parent.  Maybe that's how I would propagate more?  Anyone?  Bueller?
Posted by Turling at 10:05 PM