When we moved into this house, there was a Wisteria vine that was attached to one of the two patio covers we have.  For two years now, we have attempted to remove this vine, but with no luck.  I do not like things growing on the house.  Weakens the structure and causes problems.  Pergola away from the house?  Grow little vines, like you've never grown before.  As with most things in life, I know when to change my tune.  This is one of those times. 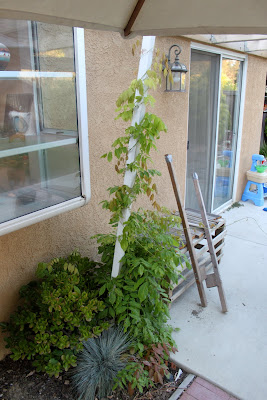 We have decided to allow the Wisteria to return to its normal perch on one of the patio covers.  I took a piece of scrap wood and leaned it against the patio cover to give the vine something to adhere to.  Yes, those are stilts in the background, designed and built by a seven year old, who is pretty damn good on them. 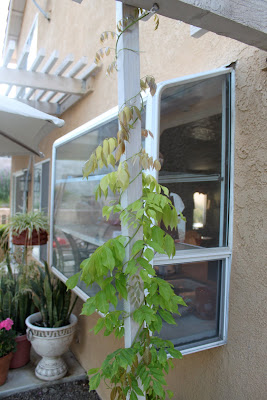 The one disappointment is that the Wisteria was close to 10 years old, I believe, when we took it out and had quite a bit of character to it.  Now, we'll be starting over.  Keep in mind the "Greenhorn" portion of this blog.  We all learn from our mistakes.  And, no Greenhorn is not referring to a venereal disease.  Remember the gutter people.  We're from America, different meaning.

This is the patio cover it will eventually cover. 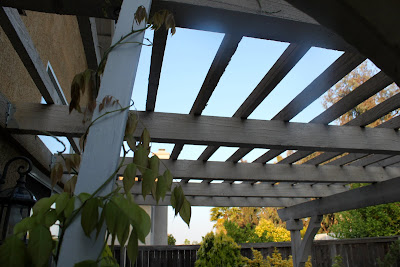 In the past, the vine has completely covered this patio cover by the end of the summer.  We'll need to be sure to keep it trimmed to keep it from grabbing onto the house.  In the meantime, lesson learned.
Posted by Turling at 7:00 AM